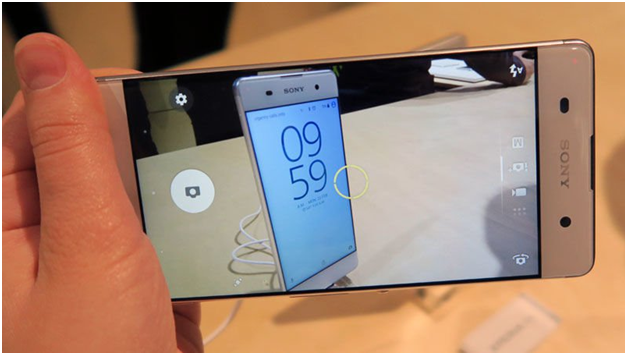 Everyone expected Sony to unveil the successor to the Xperia Z5 series with Z6 moniker at the MWC 2016 this year. But the Japanese giant revealed a new lineup named the Xperia X. Feature wise there have been some exciting additions but the X lineup does not really offer a breakthrough in design! The pricing is not finalized but that could be a tad lower than the Z series. There are 3 phones in the series, namely the Xperia X, XA and X Performance. The Xperia X sits at middle of the lineup with mid-range specs and some interesting new features.

The Xperia X may dishearten the lovers of large screen Smartphones which have flooded the market. The device has a 5 inch screen. The Sony Xperia X is only 7.9mm thick and offers excellent grip. The curved glass seamlessly blends into curved edges. It weighs about 153 grams. You get colors like Graphite Black,White,Rose Gold and Lime Gold. The build quality is good but for waterproofing, you have to pick the X performance variant. You will surely notice the boxy build looks a bit rounded as the curves are a little changed. For more information on screen and display technology, you may refer to Sony website.

The 5in display of Xperia X powered by Triluminos technology is stunning and has a resolution of 1080p HD. The colors pop out and viewing angels are also nice. It does feel like a premium Sony display overall. While the display would be adequate for most users, it is worth noting a number of rivals now sport 2K and higher displays.

The Xperia X does sport a new generation Qualcomm Snapdragon CPU but it is not exactly top notch. The Snapdragon 650 chip is aided by 3GB RAM. For hardcore gaming and smoother multi tasking you may better opt for the top of the line X performance model. The device has 32 GB inbuilt memory. You may also add a micro SD card up to 200 GB capacity. The downer is you get to use only one SIM card. The fingerprint sensor is placed on inside and the device runs Android 6.0 OS. The overlay has not been changed much.

Sony Xperia series models have always been lauded for their superlative imaging technology and performance. The Xperia X does come with some exciting enhancements in imaging department. The device has a 23MP rear camera with Exmor RS sensor. The front camera has resolution of 13 MP resulting in clear and sharp selfies. The rear lens is aided by new Predictive Hybrid Autofocus feature. It looks good on paper but in real life the performance varies a lot on lighting conditions. Sony claims it helps reduce motion blur to an extent. The camera app is nifty and you get features like HDR,quick launch and video stabilization. You also get a manual mode in the camera app which enables you to tweak settings to an extent.

Sony claims the Xperia X should offer 2 days of battery life under normal situations. Given the capacity of the battery, this seems too good to be true. In a time when most rivals are launching models with bumped up battery, the Xperia X sticks with a 2,620mAh battery. There is no support for wireless charging either, a feature that has seeped into top end smart phones nowadays. However, you will get 5.5 hours of battery life by charging the device for only 10 minutes.

The Sony Xperia X has a number of things going for it but overall it does not quite offer the punch to overtake category rivals. The build quality is good and design is aesthetic but it is almost like the predecessor Z series. It has an impressive display and the camera technology is also appealing. Features like waterproofing has been reserved for the top line variant where as many low priced rivals fare better. Despite claims made by Sony, the real life battery performance remains to be seen. Sony loyalists however will like to lap this beauty up. For more formationon pricing and availability you have to stay tuned to Sony.