How to Convert a Website to iOS App [Beginner’s Guide]

That’s because no online converter will make a performant and good-looking application out of your website. But this doesn’t mean making a native app is the only option (though it’s the best one).

Why native apps are worth it, what other options are these, and how to find the right team who can convert your website to an ios app in this guide. 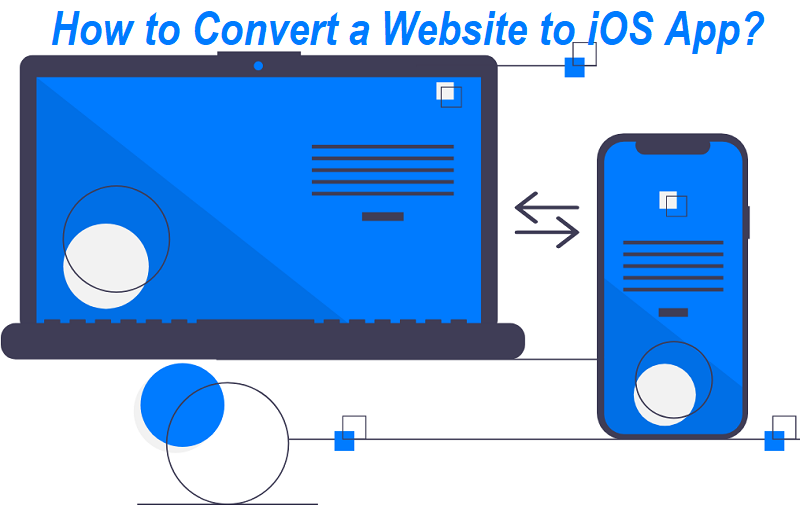 Let's start with the reasons why having an iOS app is worth the money:

1. US users spend 2+ hours per day on their mobile devices, mostly with apps.

2. You can't use push notifications on websites, which is a great way to keep your users informed and engaged. With a website, the most common way to reach customers is to use an email. But your users probably get tons of email every day, and it's impossible to pay attention to each.

3. You can't use native devices' features on websites. This includes geolocation, NFC, geofencing, Bluetooth, access to file storage, and so on.

4. Websites don't work without an internet connection. No internet, no access. While mobile apps do work in offline mode. Sure, there are some limits: for example, you can send a message when you're offline, but it won't be delivered. But you can access your message history anyway.

There's an option to make a progressive web app (PWA) out of your website. PWA is still a website with some native-like features like offline mode or push notifications.

But PWAs don't gain much support from Apple as the company focuses on native apps. For example, even push notifications don't work in Apple's Safari.

It's rather a good option for Android/ChromeOS-powered devices.

Another option is to create a responsive web design that'll look good on all iOS devices. But this approach also has cons.

First, what's responsive web design? It's when the website's layout is shrinking or expanding according to your display width. Even if the window is changing in one pixel, the page will rearrange its elements a bit.

This method lets developers save time and money on designing the mobile web version. Yet, it's crucial to make sure that all elements and layout look nice on different devices.

As a huge amount of traffic comes from mobile devices, every website should be responsive by default.

Still, the responsive design won't look the same as the native app design.

Let's review an example. Here's The New York Times—their responsive website and a native iOS app. They have the former for quality online presence, and the latter to give their users a choice.

Native apps offer more content and better navigation; they don't need to show a URL. A native app loads faster and caches articles, so users can get back to them even if they're offline.

Besides, the New York Times app offers personalized articles for its mobile users.

Fun Fact # 1: There are lots of online converters offering you to turn an existing website into an iOS app.

Fun Fact # 2: Most probably, you won't be satisfied with the end result.

Usually, such converters simply place a website into a WebView-wrapper.

You can't change such an app in any way, for example, if you want to add a couple of new features. Even more, Apple tends to reject such apps, as stated in their guidelines.

They thoroughly check each submission and publish only useful apps that have unique features. If your web content isn't formatted for iOS, the chances are it'll be rejected.

Want a good iOS app? Then be ready to build it from scratch.

This means you need to hire good iOS developers that'll do the job for you. Or become a part of your existing tech team.

There are three popular options:

Contrary to popular belief, many qualified iOS developers, UI/UX designers, and QA engineers work as freelancers. Their services cost less than agencies or in-house teams, and they're quite good for small projects.

But there's a catch: you'll need to be an excellent manager to keep track of their work.

2. Work with an in-house team

You look for local developers, interview them (if you're not tech-savvy enough, grab a friend that can help), and offer a place in your office.

The drawbacks are probably the costs: iOS developers get $96,016/yr, according to Glassdoor.

The most cost-effective option of all. It's much cheaper to hire a developer from Poland than work with someone who lives in the USA. Besides, software dev companies offer business analysis and project management as a part of their services.

The drawback is the language barrier. You'll have to find a team that speaks English well, especially when it comes to Project Managers.

No matter what team you choose, make sure they have experience with Swift or Objective-C programming languages.

Technologies You Need to Develop an iOS App

Before you hire iOS devs, make sure they have the following skills:

● Know the process of designing an app;

● Experience with Metal or OpenGL;

● Have knowledge of the Core Data framework

And look through their portfolio for similar projects. Or even download some of the iOS apps they've developed.

1. Don't use online website converters. You'll only get a barely working app, most probably rejected by App Store.

2. The best option is to expand your website with an iOS native app. Native applications work better when it comes to user experience and engagement.

3. If you don't have enough resources, try making a PWA or responsive website. PWAs don't get much support from Apple, though. But they offer some cool features like offline access and an app icon on the device's home screen.

4. Have a limited budget? Try outsourcing. It's more affordable than hiring an in-house team, and the quality often stays the same.