This week, lots of users were conversation on some forum either Google has updated their Algorithm. This chatter is not heavy but enough chatter. I was 100% confirm about Google updated because Google recently rolled out a refresh to their algorithm in December 2012.Hence, it was not the good ideal and time to push another Google algorithm. Therefore, there are so many rumor around in the SEOs and blogger community about an unofficial either Panda or Penguin update. I have seen the two chatters began a thread on similar topic. Both the threads were related on website traffic falling.

I have seen the two threads on WebmasterWorld and I am sure about the update which was rolled on January 2013. But personally, I am not clear either it’s a Panda and Penguin or other algorithm. Nevertheless, it is confirmed that there was some refreshment that Google has updated their search algorithm.


There are so many automated monitoring tools available but they didn't show anything substantial results. Hence, we can’t verify whether it was an update or not. These kind of forecast were automated monitoring tools and update their statistics on next day Monday, 14 but I was waiting for effect but all things was normal. If you want to see the weather reports then check out below report of Google Algorithm. 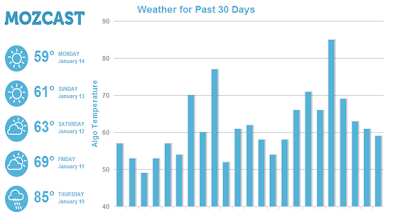 I had reviewed the weather reports but it shows nothing because we didn't see the any kind of ups and downs in the Metrics.

I was wondering that several peoples were thinking that there was few kind of Google update was correct in their own view because Google never discloses their hidden stuffs in public. All of you know that if Google updated any algorithm then they decline all the rumors by diplomatic statement. There is simple and easy formula, just smiling at each other’s face and wondering what would be the upcoming move by Google and its teams.

I know that there are so many people who don’t recover his site from Panda, Penguin then, he should start to read my last post which mentioned the facts and figure about Penguin victim. If anyone doesn't understand then he should start a new website. When you will make your new site then read the about Panda and Penguin algorithm. In these algorithms you need to concentrate on quality content and quality backlinks forget about the quantity because old work are old ones now season has changed. Don’t write too length articles, just focus on quality content. Several SEOs users argue that we have Reconsideration request to recover from Algorithms but rightly one cannot recover it fully.94% of Google Penguin victims didn't fully recover. If you recover then main problem is traffic, you can’t get quality traffic.