Drop The Number Of Blocked URLs In Google Webmaster Tools 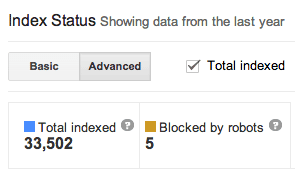 Google's John Mueller described that it may take quite a while for Google to re-crawl and observe the pages are no longer there.


It's likely going to take quite some time for those URLs to either drop out of the index or be re-crawled again, so I would not expect to see that number significantly drop in the near future (and that's not a bad thing, it's just technically how it works out).

We also be familiar with the index status report is slowed down by about a week or so.