The 20 Angriest Reactions to Last Night's Shocking 'Game of Thrones'


WARNING: Avoid read further if you have had not seen Sunday night's show of Game of Thrones, "The Rains of Castamere." The truth is, don't hop on the internet whatsoever. And possibly keep away from contact with every other human.

Previous night, the disaster that numerous Game of Thrones lovers knew was returning — whether from books or from a dangerous barrage of online spoilers — eventually happened. Yet the not left had probably over heard whispers of previous night's condemned "Red Wedding."

Lovers of both the books and appear saw in scary as Ned Stark's eldest son and King of the North was Disappointed by Walder Frey and Stark bannerman Roose Bolton. Robb's mother Catelyn endured a horrific stabbing. Robb's pregnant wife Talisa was brutally stabbed. Even Robb's direwolf Grey Wind was hit down in a pen — not forgetting the vast choice of Stark troopers who were killed off as they cherished the wedding outside.

The moment the episode aired, lovers erupted in scary and wrath across social media. A Twitter account named @RedWeddingTears started out to retweet the most anguished reactions.

Listed below are 20 of the extremely outraged reactions to previous night's painful closing, showcasing just about all 7 levels of suffering, many death threats and a wide range of profanity:


I would very much like to meet George RR Martin in a dark ally... Why the hell do you kill off my favorite characters??? #gameofthrones #ahh
— Sarah Jennings (@lexingtonsarah) June 3, 2013

*jumps off the highest point in King's landing* FUCK THE LANNISTERS. FUCK ROOSE BOLTON. FUCK EVERYONE ON THIS GOT DAMN SHOW
— Terence Johnson (@LeNoirAuteur) June 3, 2013

Holy Mother of F. I have nothing quippy or cool to say re: Game of Thrones. I'm shattered. #GoT
— Elizabeth Banks (@ElizabethBanks) June 3, 2013

sometimes I hate TV writers and their fucking god complexes! you can't just fuck with my emotions like that! Fuck YOU HBO and D.B Weiss
— Tania Cheema (@T_isforTalent) June 3, 2013

If George Martin was in Auburn right now I'd stab him in the heart.
— Alex Mastin (@mastinalex) June 3, 2013

I'm fuckin heated right now james rr martin or whatever the fuck your name is your a sick man what's next joffrey wins the war god damn
— kurt (@VivaLa_Hendrix) June 3, 2013

how the fuck am i suppose to go to school and work and function after that game of thrones episode, fuck im shaking and crying
— Niccolò Rockiavelli (@Everyones_Niggy) June 3, 2013

So #1 I read the book and #2 I understand on a cognitive level that these are fictional characters.But cannot stop crying #gameofthrones
— Andrea(@ameliapond1) June 3, 2013

Dear @gameofthrones, fuck you. Give me a new reason to live.You owe it to me, considering my 3 year dedication. Note to self: Cancel #HBO
— Denise Hagerty (@the1NonlyMEEE) June 3, 2013

I've never cried so hard. I hate Game of Thrones right now. I don't know if I'll ever recover from this.
— Jessica Rae ⚓ (@jessicarmueller) June 3, 2013 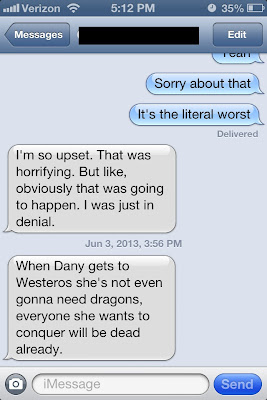 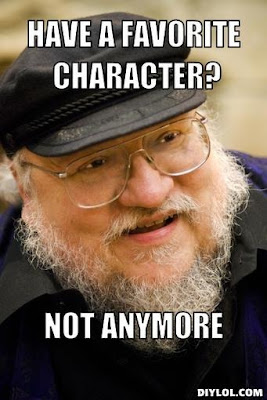