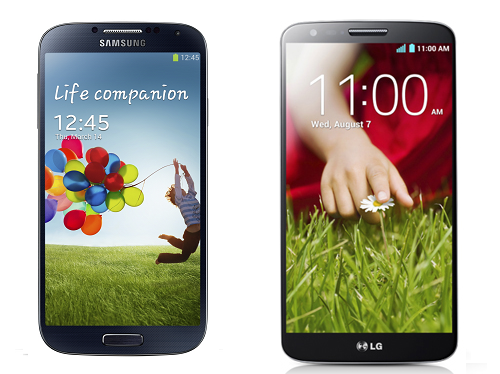 The LG G2 and the Samsung Galaxy S4 are two of the hottest new phones on the market right now. But in a face to face comparison, which one wins the Smartphone smash down? Let’s take this in rounds.


Round 1- Performance and Storage

While the LG G2’s 2.26GHz processor technically outguns the Galaxy S4’s 1.9GHz, these phones rank pretty evenly in terms of day to day primary functionality. But the G2 wins this round anyway, with 32GB of storage to the S4’s 16.

The Galaxy S4 starts out strong in this category for a funny reason- the power button. Deciding not to tamper with a layout most smartphone users are used to, Samsung left the on/off switch in the upper right hand corner of the phone, while LG moved it around to the back. Generally not well received, the rear placed power button makes it awkward to turn the phone on and off or to wake it when sleeping. Still, the G2 makes a comeback in this round with two features that shave seconds off of a user’s operation time. The first is a call button situated next to all contacts. Instead of finding a name on a list, then pulling up contact info, and finally dialing out, the G2 puts a green phone icon next to each name in your contacts list for easy and quick outgoing calls. The G2 delivers a second blow in this round with another time saving feature- a camera icon on the lock screen. Whereas the Galaxy S4 requires a user to unlock and then navigate to the camera feature, the G2 offers access straight from lock screen to camera with just the swipe of a finger.

This round is a close one. The LG G2 has a larger screen than the Galaxy S4, but both pack a punch with the same HD resolution. In every day usage, the G2 takes the title. It offers excellent contrast and bright colors and far outperforms the Galaxy S4’s grey-tinted screen images. However, the Galaxy S4 fights back when that same grey tint offers an advantage for video viewing. Suddenly the high contrast and bright colors of the LG G2 fall on the cons list when they distort the overall quality of a video. The Galaxy S4 is in a class of its own when it comes to viewing videos, but falls short on screen quality for everyday use. We’ll call this round a draw.

Here’s another round with the G2 as the clear winner. The Galaxy S4 struggles to capture clean images indoors or in dimly lit areas, leaving the user with blurry, dark photos. Additionally, the S4 bleaches out its subject with a flash that is too focused in one area. The G2 offers a camera with better precision and a flash that is evenly dispersed across the frame.

This round is arguably the most important round for people constantly attached to their smartphones. After all, even with the G2 winning in almost every other category, it would be hard to name it the Smartphone Smash down winner if it underperformed in terms of battery life. Fortunately, here too it outshines the Galaxy S4 with the majority of user reviews giving the G2 a single charge run time of 4.3 hours to the Galaxy’s measly 3.75.

The LG G2 wins 4 rounds, with one round called in as a draw. The Galaxy S4 is simply outmatched in almost every category and this hardly seems like a fair fight. Despite both products being marketed as the hot new thing in smartphones from their respective brands, it is almost painful to compare the two. There are a few drawbacks to the LG G2, particularly the strange placement of the on/off switch and the less than stellar video viewing feature, but overall it is a great new phone that clearly takes the title in this matchup. In the proverbial ring, the Galaxy S4 may show up to duke it out, but it certainly should be “crying uncle” before the final bell dings and the G2 delivers the knockout punch.