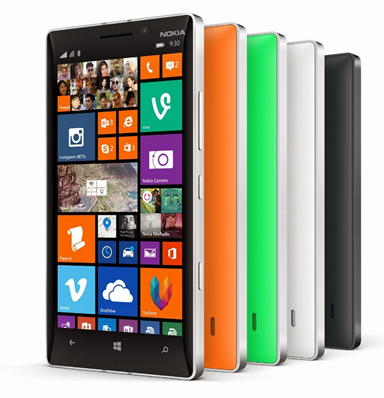 The Nokia Lumia 930 (keeping the heritage of the company even since the Microsoft buyout) had us intrigued since its release, and we think it is a stunning Windows Phone, read more to find out why!

The Lumia range of phones has long been renowned for their simplistic but sturdy construction, and the 930 is no exception. It feels comfortable in the hand, thanks to its slightly curved rear and the rounded edges of the chassis. The Lumia 930 also has a nice hefty weight to it, not so much that it fatigues your arm, but a reassuring sign of quality.

A non-removable vibrant back panel is the staple of the design, with a variety of colours to choose from, so the battery itself is fixed in place which may be a problem for some. There is a lovely large 5 inch screen with a softly bevelled glass front, slightly unusual when compared to the flat design of most phones, but it's certainly distinctive and we like it! Running Windows 8.1, the phone is no slouch, has a familiar feel for all those Windows users out there and even those new to it.

The tiled OS approach is a very nice and simple way of using and organising apps, we grew to really like it with a bit of practice. The ability to resize tiles is a fantastic feature! It is safe to say that design is a large factor of the appeal of the Lumia 930, from the build quality to the aesthetics of the software/hardware, it is certainly a looked.

A rear mounted speaker plays your music / app sounds, and does its job well. Don't go expecting Boom sound clarity or loudness, but it does the job admirably. 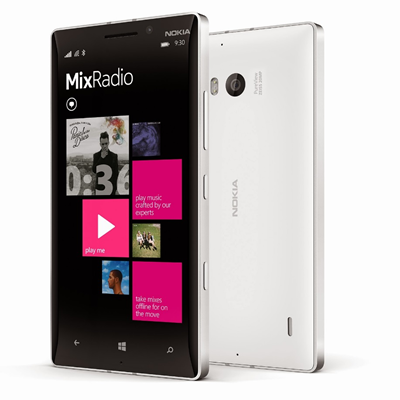 Boasting a 20 megapixel sensor, the Lumia 930 has the ability to produce some lovely images, it even lets you save them as a RAW .dng for future external processing, how cool is that!? Using the Nokia Camera app gives you full manual control over the camera, from shutter speed to ISO to focus, it is something other manufacturers can learn from, this is the way forward. Ofcourse there is always the standard full auto modes which do a great job for a happy snapper. We were impressed by the amount of detail this captures, rivalling compact cameras.

Built in Optical Image Stabilisation will help those with shaky hands to get that crucial shot, which also helps that the focusing is quite fluid on the camera. No issues there really noted. One thing that did bother us during testing is how noisy the image can appear in dim light on the preview, however once you take the image it was significantly better (mostly due to the processing we assume), and so there is a slight bit of guess work.

You also have the ability to record up to 1080P 30fps, which can give some nice video, this is where the stabilisation really shines.

(The upcoming Denim update also gives you the ability to record in 4K!)

We were VERY impressed by the 4 microphone array that the Lumia 930 uses, which gives a very natural and full sound to your video recordings.

So for all those musicians, YouTube’s etc. out there, this could be a fantastic feature for your recordings.

The Lumia 930 sports a 5-inch Full HD 1920x1080 AMOLED display, and while it doesn't match the Quad HD screens of some competitors, it is a VERY strong display and is a delight to use. Bright, vivid, fantastic viewing angles and easy to read in direct sunlight, it copes with day to day use very well.

It is one of the nicest screens I have personally used, and that's saying something!

Windows 8.1 is a nice change of pace from Android or iOS, and it is very snappy to the touch. We had no problem with the performance of the phone, even if it doesn't use the latest Snapdragon processor; it does the job and performs as a phone of this price should. Games (while limited by the selection) run flawlessly in most instances, so do general apps. Facebook, Twitter, Instagram, all work without a hitch, gliding between one another with ease. No discernible lag was present at the time of testing.

One of the main features of any phone nowadays with all these huge screens and powerful components is the battery life! I can happily say that we were thoroughly impressed with the Lumia 930, in a typical day of use we soared through the day with 20-30% leftover, so we didn't have to sit there and worry that it was suddenly going to conk out on us.

A big thumbs up on that one.

Of course if you are going to be sitting there playing games on it all day with the screen on full brightness and background apps running, your mileage may vary! In regards to call quality, it was clean, loud and crisp from both the receiving and sending sides. The on ear speaker gave us good clarity and plenty of volume for our conversations without struggling to hear what the other person was saying.

Very good results on the sending side too, I assume due to the fantastic microphone array on the phone, we expect nothing less. 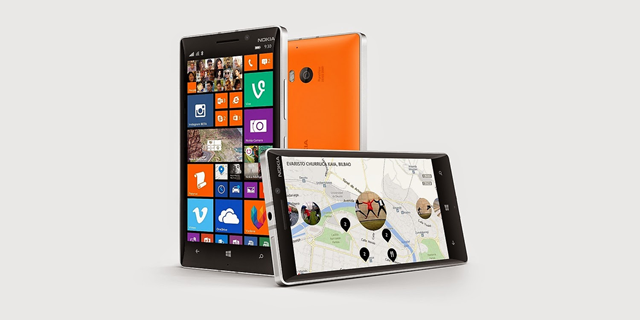 The Lumia 930 is most certainly the finest Windows Phone out there at the moment, a true class leading performance put in by a well-designed and thought out phone.

A great screen, a good camera in decent light, fantastic microphones for video recording (and time will tell if the upcoming 4K video will be just as good as competitors) and solid built quality make this one that is sure to bring new customers in to the world of Windows phones.

Windows 8.1 is a beautiful experience overall and will please most of the crowd, apart from the die-hard iOS or Android lovers who may complain about the lack of apps in comparison to their platforms, but the main ones are there don't worry.

Microsoft are doing Nokia proud, we hope they carry on with the brilliant design and bolster the software side, if so other manufacturers better watch out! So there you have it, the best Windows Phone hands down.