Home » Penguin Update » There Was No Google Panda Algorithm Update Or Index Update: According To Google

There Was No Google Panda Algorithm Update Or Index Update: According To Google

Google Says: There Was No Google Update, We’re Mentally Disturb

Sometimes people dreams are pretty high they really want to turn it into reality,but is there large volume of people have the similar dream and if someone are tell them that their dream is not in reality then, we can take over what that person would fell. Okay, I am rolling it here…Last Friday weekend, I found significant and convincing signs of a Google Algorithm update on December 13th. After the update this new Google algorithm, the impact was so big that it literally savagely the whole blogosphere. However, Google has verified the there was no Google update neither Google Panda nor Google Penguin. Last post I published new about Google update and their algorithm but now there is no update. That means, the entire webmaster owners and SEOs who saw the lots of ups and downs were not correct but now there lots of questions that are wobbling in my brains and of course bloggers.


Now question is what about the major fluctuation in Graphical Traffic representation of Mozcast, SERPs.com and SERPmetrics? They all showed tremendous signs of a Google Algorithm Update and they track the information quite right. Perhaps it was a site bug or error that causes the ups and downs? Maybe something suspicious is going on. I wonder that it will remain a secret and on one judge it that why we saw an increase or decrease in our traffic. 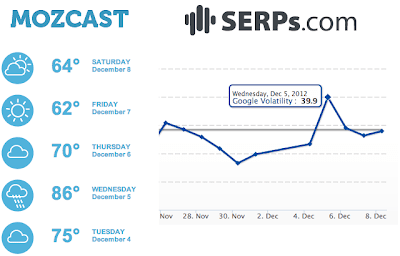 I am sure there is no Google Algorithm Update. Hence, it’s time to focus on your website content and quality backlinks because maybe the next Google update will blast all blogger and SEOs community so, there is only one road that is high quality content. As everybody know that Christmas and New Year is coming at corner. Maybe Google would give you surprise on these events. Let’s hope for the better.

But my inner feeling is saying that that was Google Algorithm Update but I am not sure why Google is ignoring to accept it. Nonetheless, I think this time not needs to go in depth because every time Google has kept several things secrete, there is one solution just wait and watch what happen next. What are your views on this? Gives your valuable feedback, take care till next Google update until, peace in your life and God save our life.