Today is the black day in the history, why? Because there is a well-known text messaging application Viber has been hacked by Syrian Electronic Army in awake to bring out their fishy plans of furtive over the huge amount of users for Israel Government and Agencies. Viber is itself unfold to the group of Syrian hackers and after that they are disclosing their plans of spying on high end Smartphone users who are utilizing it to chatter around the globe. In xtra to the application hack, the hacker group also handled to gain access on their support dashboard and interchanged the root page with defaced page.

Now users are asking why they hacked Viber application and what are the plans behind this? But nobody knows that. Syrian Electronic Army aka SEA or pro-Assad hacker group has not discloses their plans behind this huge hack. There is a site which was confirmed that Viber services was hacked by Syrian Electronic Army and losing their support control over their application servers. It is still not clear that if Syrian Hacker group is planning to utilize the stolen data and information for their personal use or this hack is only to disclose the Viber spying on its users with deep level of signing each and every UDID of iPhone devices and IP address of devices.

After the hacked application Viber has close down the support page which was interchanged by the group of hackers with their official statement about this Viber hack. I gonna show you some image of Viber support page displaying SEA message to their client and users.

“Today the Viber Support site was defaced after a Viber employee unfortunately fell victim to an email phishing attack. The phishing attack allowed access to two minor systems: a customer support panel and a support administration system. Information from one of these systems was posted on the defaced page.

It is very important to emphasize that no sensitive user data was exposed and that Viber’s databases were not “hacked”. Sensitive, private user information is kept in a secure system that cannot be accessed through this type of attack and is not part of our support system.

We take this incident very seriously and we are working right now to return the support site to full service for our users. Additionally, we want to assure all of our users that we are reviewing all of our policies to make sure that no such incident is repeated in the future.”

Still Viber is working on the application and they said that one of their employees has been targeted with an email scam attack which extends this viral hack on their application and all support servers. They also clamming that users data and information is till secure under their severs, and hackers only got access to support system.

Here’s the image posted by THN: 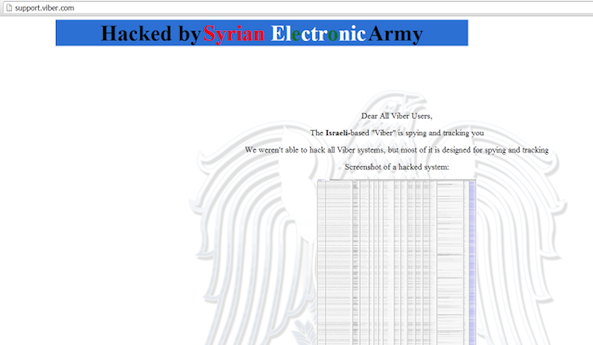